By Yellow Horse Marketing for the US Dressage Finals 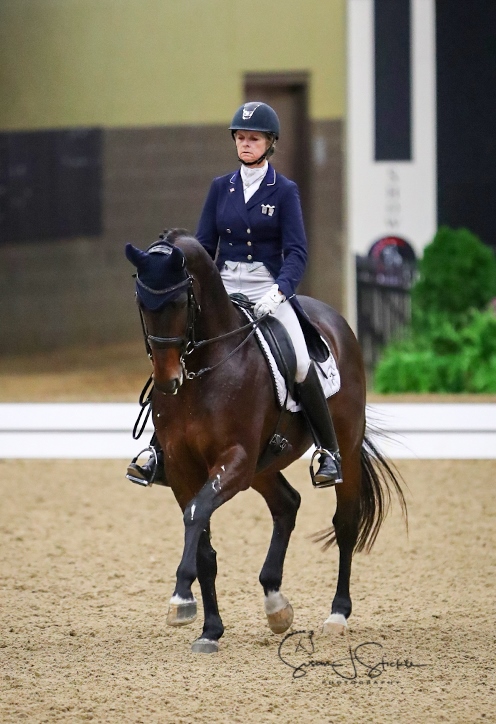 (KRISTI TRUEBENBACH LUND: Faith in her mount paid off for Kristy Truebenbach Lund at the 2017 US Dressage Finals presented by Adequan® as she rode to victory in the Intermediate II Adult Amateur division.  Photo by Susan J. Stickle)

Last year, Kristy Truebenbach Lund’s trip to the US Dressage Finals presented by Adequan® did not get off to a good start with her mount Akvavit in the Intemediate II Adult Amateur Championship.

“My horse doesn’t particularly like indoor venues anyway, and last year when we came into the Alltech Arena someone was using a camera with a flash throughout our entire test,” said Lund. “It completely unnerved my horse and ruined our ride. So I was determined to come back this year and win.”

Mission accomplished for Lund, a small animal veterinarian from Wellington, Fla., as she rode Blue Marlin Farm, Inc.’s 14-year-old Spanish Warmblood gelding (Silvester x Onni by Jazz) to finally claim the coveted championship with 65.088%  in the Intermediate II Adult Amateur division, the first of 30 national titles to be awarded over the next three days across all levels from Training to Grand Prix for both Open and Adult Amateur competitors at this year’s fifth-annual Finals, being held November 9-12 in Lexington, Ky. Finishing in reserve was Selena Wilson of nearby LaGrange, Ky. with her 12-year-old Holsteiner mare Vanity (Cotopaxi x Silvershulace) on 64.298%.

Lund took an initial leap of faith when purchasing Akvavit off a video from a bankruptcy auction in Spain years ago, but it’s been her continued patience that has finally allowed her mount to blossom in the show ring. “He’s hot, and while it’s nice to have a horse with a lot of go, the trick is controlling it,” Lund explained. “Even today when he tried to bolt on our first trot extension on the diagonal, I just have to take a deep breath, remember it’s only one bad movement, and go on to the next. I pride myself on having a special connection with my horses, and this is the first year I finally feel like we’ve achieved that together – trusting each other enough for me to let go and allow him to show what he can do.”

Lund and her fiery gelding will have two more chances to return to the winner’s circle this week as they compete in the Adult Amateur Grand Prix and Freestyle divisions, and if victorious the pair will once again join other Region 3 competitors in proudly sporting pink polo wraps during awards ceremonies in honor of cancer awareness. “This event is the only show that really feels like a national show – it’s like the Olympics for us,” said Lund. “I always said that adult amateurs are the backbone of USDF but sometimes we felt a bit forgotten. There are plenty of programs for juniors and young riders, and professionals of course have Gladstone and their national championships. Finally we have something that recognizes the adult amateurs on this kind of scale. It’s wonderful that after all the years of talking about creating an event like this that USDF finally got it done and it’s going so well, and it means so much to so many competitors.”

Michael Bragdell of Colora, Md. (Region 8) is no stranger to the winner’s circle at the US Dressage Finals, and he found his way back to victory lane with his first ride down centerline at this year’s competition aboard Hilltop Farm, Inc.’s nine-year-old Oldenburg stallion Qredit Hilltop (Quaterback x Dream Rubina by Dream of Glory, bred in the U.S. by Judy Yancey). An impressive ride for a score of 71.535% earned the pair the unanimous win under all three judges in the Intermediate II Open Championship. 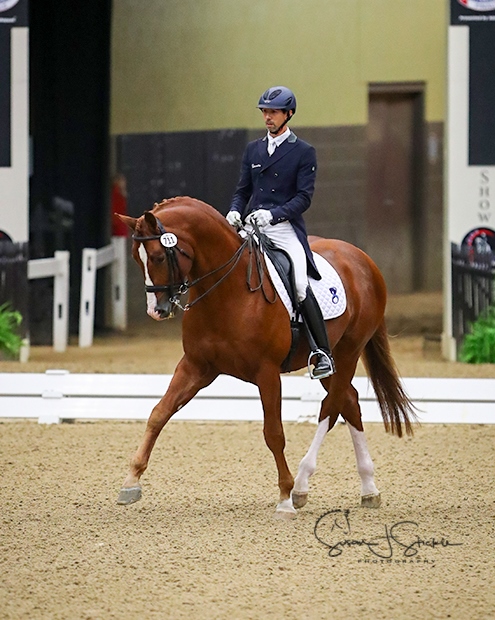 “He came here last year and caught me a little by surprise by being a bit ‘big-eyed’ in the Alltech Arena,” said Bragdell of his young mount. “So this year I took my time to focus on him being comfortable in there, and he seemed much more laid-back this time around and I think that made a big difference. He schooled really well yesterday, and my game plan was to keep him happy, relaxed, and comfortable with the arena, and it worked out because he felt super in the ring. I was very excited about our performance.”

After a sixth-place finish at the Markel/USEF Developing Horse Grand Prix Championship in August, Bragdell felt like Qredit Hilltop brought his A-game to Lexington. “At Lamplight I think I didn’t have as much horse by the last day as I would have liked to have, but as the season has progressed he’s gotten better and better and I feel like he really peaked here. It’s such a nice finish to the year in coming to the Finals because it really feels like a national championship. You hear the announcer saying riders’ names from all over the country, and it’s definitely something special to be a part of.”

Also pleased with her performance was Reserve Champion Judy Kelly of Clarkston, Mich. (Region 2) riding her 13-year-old Hanoverian mare Benise (Breitling W x Rubina by Rubinstein) to a score of 68.509%. “This is our first year at this level – we rode here at the inaugural Finals in 2013 at Prix St. Georges, so as we continue to progress I was delighted to qualify to come back here as well as with our ride today. I was very happy with her piaffe and passage, and she tries so hard and has the best temperament. This is such a special event and I’d like to thank everyone who helps to support it, especially sponsors like Adequan which have been there from the start.”

Wrapping up a busy first day of championship action and open classes in the Dressage in the Bluegrass competition, exhibitors enjoyed a Competitor Welcome Party and Trade Fair Kick-Off on the concourse of the Alltech Arena.  Championship competition resumes Friday at 8:00am ET – follow the action through updates on the USDF Facebook page and the US Dressage Finals website, as well as watch live online streaming on the popular USEF Network at this link: https://www.usef.org/network/coverage/2017usdressagefinals/. To learn more about the US Dressage Finals presented by Adequan®, download competition information, review day sheets and results, and read daily news releases, visit the official event website at http://www.usdressagefinals.com.